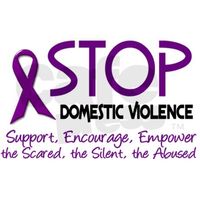 Domestic Violence Facts
Domestic violence is both a national and a worldwide crisis. According to a 2000 UNICEF study, 20-50% of the female population of the world will become the victims of domestic violence.
1)Within the United States, one out of every four American women will experience violence by an intimate partner sometime during her lifetime. One out of every six women will be raped during her lifetime.
"A Crime Against Women"
Although men are more likely to be victims of violent crime overall, a recent study by the U.S. Department of Justice reports that "intimate partner violence is primarily a crime against women.
Of those victimized by an intimate partner, 85% are women and 15% are men. In other words, women are 5 to 8 times more likely than men to be victimized by an intimate partner.
The vast majority of domestic assaults are committed by men. Even when men are victimized, 10% are assaulted by another man. In contrast, only 2% of women who are victimized are assaulted by another woman.
Vulnerability Factors
Women age 16 to 24 are most likely to be victimized by an intimate partner.
African-American women experience more domestic violence than White women in the age group of 20-24. However, Black and White women experience the same level of victimization in all other age categories.
Hispanic women are less likely to be victimized than non-Hispanic women in every age group.
Women are most vulnerable to violence when separated from their intimate partner.
The second most vulnerable group are those who are divorced. This can discourage women from leaving their abusive partner, out of fear that it will increase their risk of victimization.
Physical Injury
Approximately 40-50% of female victims are physically injured when assaulted by their intimate partner, accounting for over 200,000 visits to the hospital emergency room each year. Only about 1 in 5 of domestic violence victims wit physical injuries seek professional medical treatment.
Murder 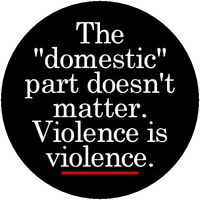 Women are far more likely than men to be murdered by an intimate partner. Of those murdered by their intimate partner,74% are women and 26% are men. In other words, nearly 3 out of 4 of the murders committed by intimate partners have a female victim. The FBI reports that between 1976 and 1996, domestic violence claims the lives of more than four women each day. Between 1976 and 1996, there was a "sharp decrease" in the number of men murdered by intimate partners, whereas the number of women murdered by an intimate partner remained constant. Some have attributed this to the increasing availability of shelters which provide battered women with options other than killing an abusive partner. It is possible that some women who might have otherwise killed their abuser are able to leave and go to a shelter.
Under-reporting of Domestic Violence to Police Only about half of domestic violence incidents are reported to police. African-American women are more likely than others to report their victimization to police. The most common reasons for not reporting domestic violence to police are that victims view the incident as a personal or private matter, they fear retaliation from their abuser, and they do not believe that police will do anything about the incident. Even with this dramatic under-reporting, domestic violence calls constitute approximately half of all violent crime calls to police departments. For example, 49% of the violent crime calls received by the DC Metropolitan Police Department in 2000 were for domestic violence incidents. Police Response Frequently Inadequate Skepticism regarding the quality of police response is grounded in reality. A recent study by the D.C. Metropolitan Police Department concluded that there was a "clear and pervasive pattern" of departures from departmental policy. For example, in only one-third of the domestic violence calls did an officer take photographs or ask about prior abuse. Only 17% of the victims were asked about a restraining order, and 83% were provided no printed information with contact information or resources.
The Myth of "Mutuality" 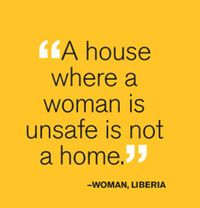 Although many studies report that men and women use physical violence at equal rates within intimate relationships, this fails to take into account the nature of the violence and the level of fear and injury experienced by each party. Several studies document that women experience higher levels of fear than men do in domestic violence situations. This is perhaps because women in domestic violence situations are much more likely to be injured -- and injured severely -- than men are. Recent years have seen an increase in the number of women arrested for domestic violence. For example, the percentage of women arrested for domestic violence increased in Concord, New Hampshire from 23% in 1993 to 35% in 1999. Vermont saw a similar increase from 16% in 1997 to 23% in 199 Some have attributed this to the increase in "mandatory arrest" policies, in which police are required to make an arrest if there is probable cause that a person has committed domestic violence. Passage of these laws was advocated by feminists and domestic violence experts to address the inadequate response to domestic violence victims by law enforcement. When officers arrive at the scene of a domestic violence crime, they often cite evidence that both partners have engaged in some aggressive behavior, and arrest both the man and the woman. This "dual arrest" strategy fails to take into account which of two people is primarily responsible for the aggression and which one is responding out of self-defense, and can have devastating effects, particularly if there are children involved in the relationship. To counteract this problem, some departmental or statewide policies now provide guidelines for an officer to determine who is the "primary aggressor" in a violent incident. For example, the California Commission on Peace Officer Standard and Training publishes a guidebook for officers responding to domestic violence, discouraging "dual arrests" and outlining several factors to consider when determining who is the primary aggressor in a domestic violence situation. The primary aggressor is defined as "the person determined to be the most significant, rather than the first, aggressor." Factors to consider include the history of domestic violence between the people involved, the threats and fear level of each person, and whether either person acted in self defense. These are appropriate considerations when determining who is the primary aggressor, and therefore which of the two parties should be arrested.
Police Training Resources 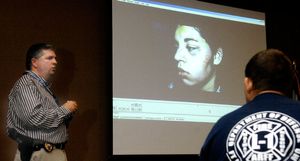